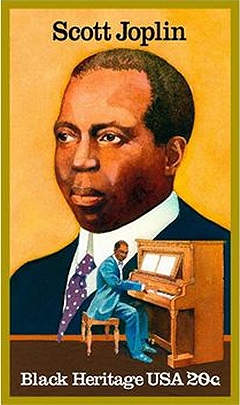 Scott Joplin was born in Texas. He played banjo and taught himself to play piano. He began learning about musical harmonies and styles by age 11 and was playing piano in dance halls as a young teenager. Joplin is mostly famous for his ragtime piano pieces – most famously The Entertainer and Maple Leaf Rag. He was the first African American to write an opera. The opera, Treemonisha, was not well received when it was produced in 1911, but in 1976 it won a Pulitzer Prize. This happened 3 years after The Entertainer was used in a major film in which the music earned an Academy Award. Better late than never!

Click here or here for more about Scott Joplin.