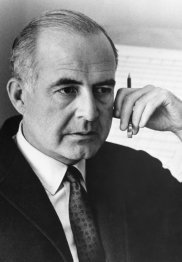 Samuel Barber was an American composer during the 20th century. He was born in Pennsylvania and began composing at the age of 7. He was commissioned to the Army Air Corps in World War II. He wrote many vocal pieces, an opera called Vanessa which won a Pulitzer Prize, and some very famous orchestral pieces.