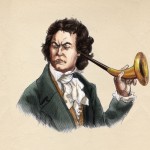 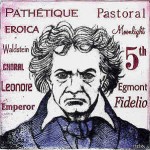 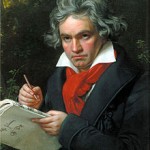 Ludwig van Beethoven began playing piano at a very young age in Bonn, Germany. When he was in his 20s, he moved to Vienna, Austria. He began to grow deaf in his late 20s and gradually became completely deaf by the end of his life. Beethoven is one of the most famous composers. He composed a variety of pieces including: pieces for piano, concertos, symphonies, an opera, and much more. Beethoven is most well known for helping to transition music styles from the Classical Era to the Romantic Era.
Click here to learn more about Beethoven.

A parody of Beethoven’s Fur Elise

Leonore Overture Nº 3 in C major, Op. 72b – The Amnesty International Concert with the Bavarian Broadcast Symphony Orchestra, conducted by Leonard Bernstein in Munich, Germany on 10/17/1976.

Symphony No.5 in C Minor

A parody of Beethoven’s 5th Symphony