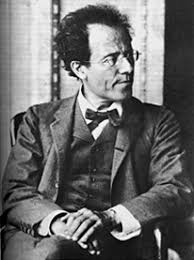 Gustav Mahler was a Bohemian composer in the Romantic Era. He began playing piano at a young age, but really made a name for himself as a skilled conductor. His music stands out mostly for his intense emotional contrast within his pieces.
Click here for more about Mahler.

Jessye Norman sings “Ich bin der Welt abhanden gekommen”
This is the fifth of Mahler’s five Ruckert-Lieder, recorded at Avery Fisher Hall with Zubin Mehta and the New York Philharmonic. Performed at the opening of the 1989-90 season.

Symphony No.9, conducted by Leonard Bernstein

Symphony No.1 “The Titan”
Conducted by Leonard Bernstein