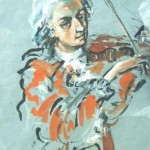 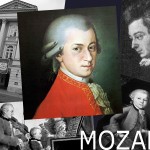 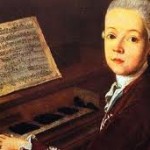 Mozart was a musical prodigy. He began composing at the age of 5 and began performing on piano and violin at age 6. Mozart only lived to be 35, but he composed all kinds of music – operas, symphonies, concertos, masses, and much more! In fact, he composed so many pieces that after his death a special system was created just to keep track of them all!

Click here or here to learn more about Mozart.

12 Variations on the theme “Ah, vous dirai-je, Maman.” This is one of Mozart’s earlier pieces. Does the melody sound familiar to you?

Concerto No. 5 in A Major, featuring Hannah White

Rondo alla Turca (from “Piano Sonata No. 11 in A major”, KV 331 (300i))
Piano: Lars Roos
Below is a different interpretation of the same piece. Which do you prefer? Why?

Below is a parody just for fun.

A parody of Eine Kleine Nachtmusik, Allegro by Richard Perlmutter

Concerto No. 1 for Horn and Orchestra

Piano Sonata No. 16 in C major

The Marriage of Figaro